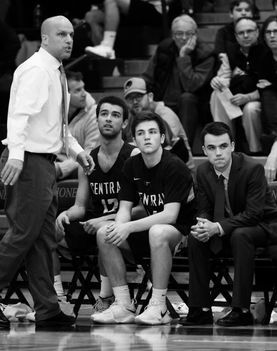 Coach Ken George just completed his first year as an assistant basketball coach for the men's team at Hope College. He retired from coaching three years ago after 24 years as the varsity boys coach at Forest Hills Central High School in Grand Rapids, Michigan.  He has been running the HoopSmart camp for the past eighteen years and West Michigan Guard Academy for the past twelve. In recent years, he has added several programs to the Ken George Basketball lineup including a fall coaching academy that sold out for two consecutive years, a fall middle school tryout camp, a summer college league, and various individual training programs with his sons Jordan and Tyler. This year, he is excited to announce the addition of two girls camps.

A Farmington Harrison graduate, George attended Albion College (1986-1990) where he was a point guard and majored in English and Communication. After two years of working in public relations in the Detroit area, he returned to Albion as an assistant basketball coach and assistant director of admissions. During that time, he also earned his teaching certificate.

Coach George has been married to his wife, Meggan, for 25 years and they have two sons. Jordan is a high school English teacher at Jenison High School and coaches the JV boys team at Forest Hills Central. Tyler is a junior basketball player and business major at Hope.